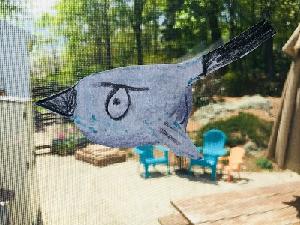 Wow, we lucked out this Bird-a-thon! The not so great weather dissipated and we had fabulous conditions for both Friday night and Saturday day. We had RECORD number of birds in our sub-team: 117 species!

Some of our most exciting moments included:
• At Bolton Flats as we were making our way to leave, we stopped to chat with some other birders. While my teammates were discussing sandpipers (identifying them is honestly a bit dizzying to me), I was scanning the flats. I saw a large bird flying toward us... but it was not a heron, nor swan or goose... and right as I realized what I was lucky enough to see, three people shouted "Look- a Sandhill Crane!" After that, it seemed we would be hard pressed to experience something else as exciting. We were the only Broadmoor team to see it. There were about 3 other Mass Audubon groups that witnessed it too.
• We went on over to Oxbow refuge, which has a river and also abuts some off-limits meadows in Fort Devens. We could still clearly hear Whippoorwills calling from the meadows behind the large gates though! This was a unique species for us this year. And we also heard a barred owl calling form the trees further behind the river. It was hard to fall asleep Friday night.
• Saturday morning was a rough start for CJ and I. 5am is a hard time to get up. Once we got in the car, our mission came into focus. We found "city" birds from the car as we drove- pigeons, red tail hawks, starlings.
• Great Meadows was not crowded at all when we arrived at 6:30am, even though there was a town walk group there. We got to see Osprey hunting over the retaining ponds, and a Virginia Rail sneaking through vegetation just beside the trail. CJ spotted a marsh wren bursting with song in an upside down v of reeds.
• Massport trails were filled with Blue-winged Warblers! Kathy and I saw them several times and CJ learned to identify their "bee- buzzzz" song. We all got to watch a male Rose-breasted Grossbeak, saw a male Eastern Towhee scratching in the leaves, and found a healthy population of American Kestrel!
• CJ and I checked two more spots on the other side of Hanscom AFB and found our Bobolinks and Eastern Meadowlark. We still can't find upland sandpipers. And Thrasher was not anywhere we have found it before.
• (Wilson and Clayton meanwhile had their own morning adventure back at Oxbow and a meadow area where they found a Pileated Woodpecker and heard Ruffed Grouse! Both extra awesome for our list this year)
• CJ and I met Wilson at the Mystic Lakes. We finally added our typical gulls and whatnot, but when we parked to explore the end of one lake, we were bombarded with noise in the trees above our car and found an Indigo Bunting, American Redstarts and Black-throated Green warblers. We skipped walking over to the lake edge, which annoyed CJ because he couldn't see the warblers and wanted to see fish in the lake.
• Belle Isle Marsh was... interesting? There was not much in the flats. We found one Great Egret, one Snowy Egret, Black Ducks, and a sandpiper we already had. We were sad not to find at least 4 other species we usually counted on at this spot. The one new species for our list highlight would be a Rusty Blackbird in the reeds off a tiny strange boardwalk that CJ loves. The other things of note is an active Osprey platform- there were two adults and a large nest.
• We hit the coastal jackpot at Revere Beach, where we added a zillion Brant! There were about 50+ floating in some waves in a large group. We thought that was a lot, then it doubled when flocks came flying in from two directions. We had a lone Common Loon, a lone Red-breasted Merganser, and a lone Manx Shearwater (there may have been more but we only saw this one!). The Piping Plovers were wandering around and easy to find this year. We struggled with some groups of diving ducks out far, in waves, with high wind and a blurring haze on top of the water but finally identified them as Black Scoter and Surf Scoter. CJ meanwhile got very bored and got his shoes and pants wet in the surf edge, after crunching the tons of clams shells littering the beach. He did manage to find a mermaid's purse, which we brought home so he could show it to his shark project group at school.
• Winthrop Beach seemed a bit dull when we arrived, then after waiting and scanning and hoping, an Oyster Catcher flew in and landed on the far right breaker. I tried to get a picture while CJ found rocks that break apart so easily in layers that he thinks maybe were made in the ocean.
• We had not much time left and were not sure the best course of action. We decided to wing it at Mt Auburn. We put a call in to Kathy to get a tip on spaces to check out. We ended up adding Blackpoll Warbler and Magnolia Warbler, just under the wire!
Of course once we are done, ie it hits and passes 6pm on Saturday, we can no longer count anything we find. So of course we all see at least 2 unique things (Wilson saw a Blackburnian Warbler) and have to sigh and hope for next year.

There is still time to donate if you can. CJ is just shy of his fundraising goal of $200. His page can be reached at web.massaudubon.org/goto/cardinal2019

We appreciate all the support we have received! Thanks for following along on FB too.
Have a wonderful day,
Dragon (Melissa)