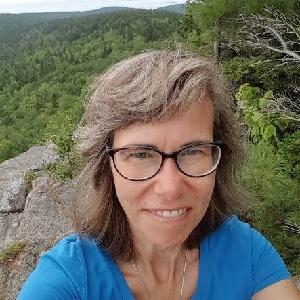 I'm on the team counting birds and raising funds for Arcadia Wildlife Sanctuary.

Funds raised from Bird-A-Thon support Arcadia’s work in the Pioneer Valley to protect land, educate about the environment, and act to mitigate climate change and its impacts.

Long before I worked at Arcadia, I found it a beautiful place in which to enjoy nature. Now that I get to spend half me week here, I’m honored to be part of work and particularly inspired by:

• Addresses climate change both by sharing actions we can take as individuals and by protecting land so that forests, grasslands, and wetlands aren’t develop. That keeps carbon out of the atmosphere, which would make global temps rise.

• Supports young people to take action and be leaders on climate change. I sat in on the action plan presentations of the Youth Climate Summit and heard a young woman say, “We are the last generation that can do anything about climate change.” Wow, that’s a statement. We current oldsters are struggling with this task so I’m ready to get behind young people and support their leadership.

• Action and outreach to break down barriers to coming to Arcadia, being in nature, and taking climate change action, particularly in the areas of race and income. I helped put together a proposal to support this work and found interesting studies on race and environmental action with findings such as: 1.) People identify as environmentalists across a range of racial identities with Latinos and Asians identifying in greater numbers with the term environmentalist than white. 2.) Spanish-speaking Latinos, for example, are alarmed about climate change at twice the rate of non-Latinos and want to take action, but the majority of this group have not ever been asked to do so. So this work is important for issues of equity but also just getting the job done of acting to address climate change before the impacts will be catastrophic.

And, yes, there are the birds and bobcats and lots of other creatures who I do believe deserve a place to live and thrive.

Thank you for helping me meeting my Bird-A-Ton goal by making a gift today!